AnRKey X™ Power Up Staking Offers Up to 80% APY

, an innovative platform that merges the best of DeFi, eSports, and Web 3.0 NFT’s announced the launch of its Power Up Staking Charge Base. According to the official announcement, these 3 levels of staking reward pools will ensure that the members can earn massive long-term rewards. Interestingly, the APY on maturity ranges from 25% to a whopping 80%. However, the staking contribution period is 7 days long and staking will close on 27 December 2020.

According to the AnRKey X

official blog, the staking process is as easy as trading on Uniswap. Along with that, it is flexible and rewarding. It comes with 3 levels of staking rewards and members can pick a pool suitable for them. The members can connect their wallets to the Power Up Staking Charge Base via a web-based portal. They can easily deposit their tokens, and see their annual yield directly. In addition to the massive rewards, the members who stake will receive a special badge that will disappear in case the $ANRX Arcade Coins are unstaked early. Those who stake for the complete term will unlock an exclusive NFT Achievement. Furthermore, this NFT can be held for a long and can be auctioned later to make profits.

Pools are filling up fast

It must be noted that all the pools are capped. A look at the staking pool page reveals that out of the three staking pools, the God Mode pool has already reached its 100% capacity. The remaining two Legendary and Infamous have reached 89% and 25% of their capacity. 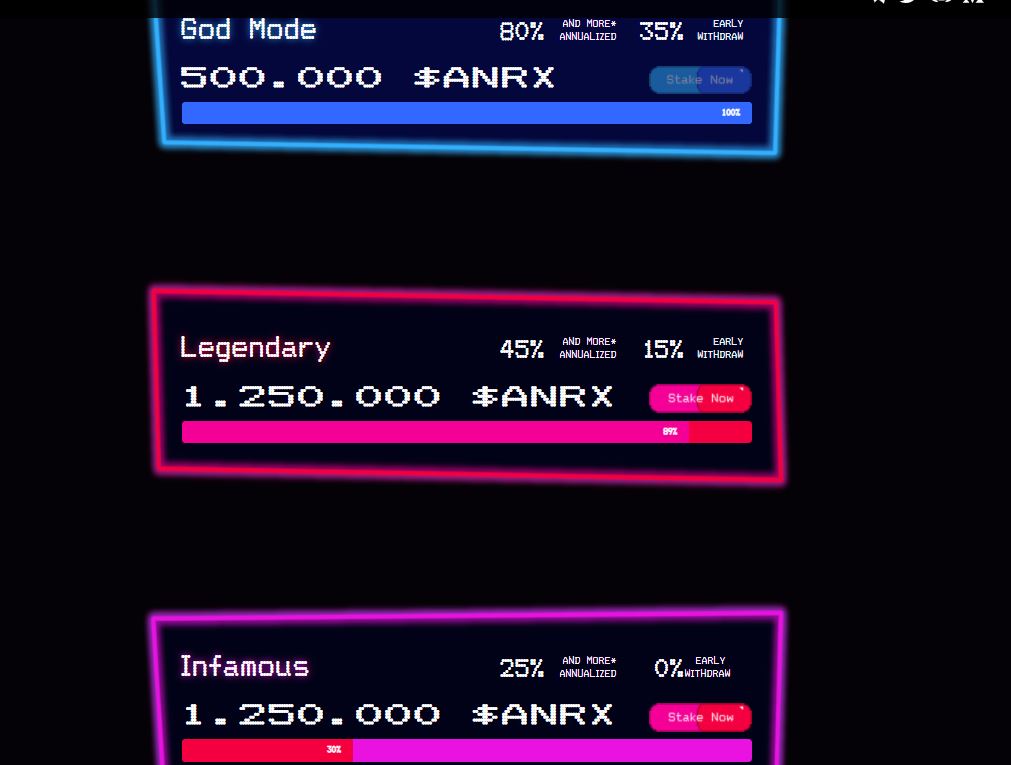 Staking Charge Base is a win-win situation for the platform as well as the investors. Along with the interest to investors, the staking will secure the network and will take the staked coins out of circulation. The three levels are:
Infamous

This will be a pool of newly recruited soldiers. By staking, they can boost their social cred in the army. The staking pool has a maturity period and a mandatory lock period of 90 days. Moreover, the maximum capacity of the pool is 1,250,000 $ANRX and members can earn an APY of 25% on maturity.

After Infamous, there are the players who have won some major battles and earned themselves a good name. For their heroic play, they will receive ultra-power boosted rewards and can become Legendary. The staking pool has a maturity period of 180 days and a mandatory lock period of 90 days. Moreover, the maximum capacity of the pool is 1,250,000 $ANRX and members can earn an APY of 45% on maturity. Apart from that, the APY on early reward is 15%.

The most skilled and fearless players will be the immortal ones. And these are the ones who will receive the ultimate boost power to reach the God Mode. The staking pool has a maturity period of 365 days and a mandatory lock period of 180 days. Moreover, the maximum capacity of the pool is 500,000 $ANRX and members can earn an APY of 80% on maturity. Apart from that, the APY on early reward is 35%.

Impressively, this Power Up Staking offers community investors a chance to earn an annual yield of up to 80%. Along with that, it will take out 1.5% of the total $ANRX supply from the circulation.

has come out with an innovative gDEX protocol. Precisely speaking, gDEX protocol is an Ethereum based protocol and stands for Decentralized Finance Gaming Platform Exchange. The aim of the protocol is to enable full-scale real gaming industry interactive games. These games will be based around DeFi mining systems and will reward players with the rarest NFT’s.

For more crypto-related updates, do check out our Altcoin Buzz YouTube Channel.

The post AnRKey X™ Power Up Staking Offers Up to 80% APY appeared first on Altcoin Buzz.

Another futuristic cryptocurrency city will be built in Africa, Senegalese-American star Akon has announced. The government of Uganda will make...

Tech companies like Oracle, Tesla, Hewlett Packard, and now Blockcap are moving to Austin, causing many to call the state...

Bitcoin’s three-month futures premium reached a record-high of 50%, signaling market inefficiencies. Bitcoin (BTC) has been struggling to break the...

Over the last eight years, U.S. law enforcement has seized a great number of bitcoins and at one time, the...

To date, Binance Coin has rallied 900%, which makes the token’s $64 billion market cap larger than Santander, the Bank...