The developers behind the Chainlink project have been hard at work for the past few months since mid-2020. This is according to an analysis by the team at Santiment feed who have pointed out that Chainlink’s Github commits have continued to rise over time.

Furthermore, the team noted that every time development activity slows down, the price of Chainlink experiences a significant increment. The team at Santiment shared their observation via the following statement and accompanying chart demonstrating the relationship between Github commits and the price of Chainlink (LINK).

The rate in which Chainlink developers are submitting new commits on to the team github continues to rise over time! Also, interesting to note that small drops in development activity rates have historically aligned with LINK‘s largest price spikes. 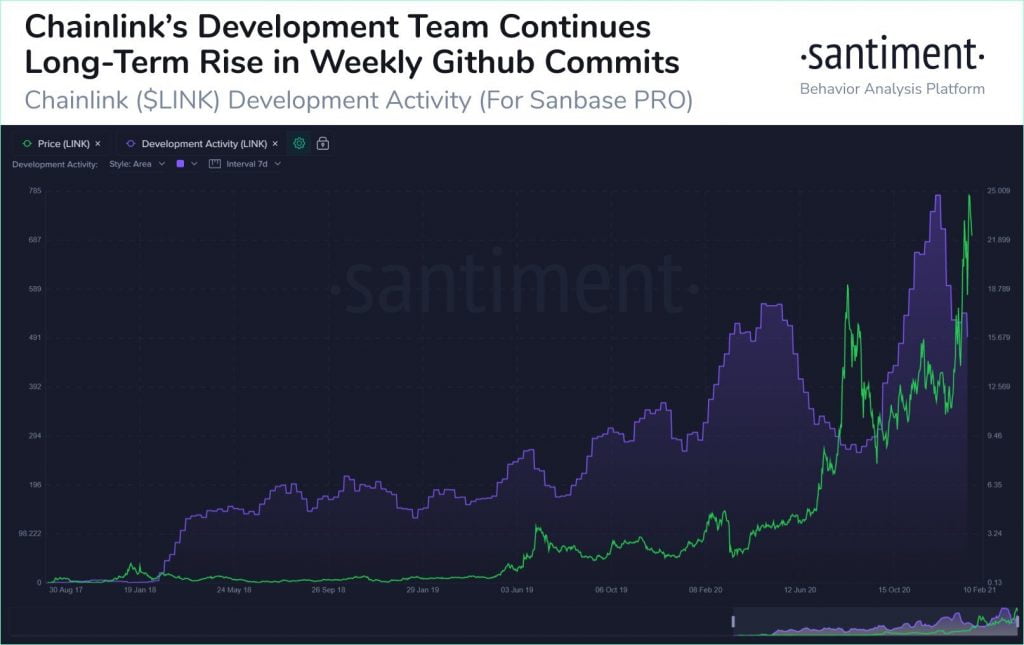 With respect to price, Chainlink is currently defending the $21 support zone as Bitcoin experiences its very own battle defending the $30k – $32k price area. Earlier today, Bitcoin dropped to $30,333 – Binace rate – in what looks like an attempt to print a double bottom around the recent low of $28,800. The latter level was reached when the crypto markets panicked after reports of a $22 Bitcoin double spend event was hyper sensationalized.

As with the vast majority of altcoins, Chainlink’s fate is tied to that of Bitcoin and the King of Crypto is currently facing several BTC futures and options expiries this Friday, January 29th. Therefore, Bitcoin is bound to experience significant volatility that will interrupt Chainlink’s bullish momentum as it attempts to retest its recent all-time high or break into $30 territory.

Once the Bitcoin futures and options expire this week, Chainlink traders and investors will have a clearer picture of where LINK is headed without the bearish influence of BTC.