Fuse Network: How to Stake and Delegate FUSE Tokens

Fuse chain is an Ethereum sidechain designed specifically with the aim to rejuvenate the traditional exchange or payments systems on the blockchain. The network is supported by a number of validators who help in the smooth functioning of the network. The validator can be any organization or company that runs the node that validates network transactions or executes smart contracts. And in return, they get paid in FUSE tokens.

The Fuse Network uses the Delegate Proof of Stake (DPoS) mechanism to elect a validator. Thus, this constant election of validators keeps the network safe from any malicious activity.

We will be using the Fuse Staking and Fuse Swap features in this article. Now let’s get started.

You can get the Fuse Token from Uniswap.

Go to Uniswap and connect your MetaMask wallet.

Double-check the token contract address. You can get the token address from Coingecko.

As you can see from the below snapshot, we are swapping some ETH with FUSE tokens. Enter the amount of tokens that you wish to buy and confirm the Swap activity. 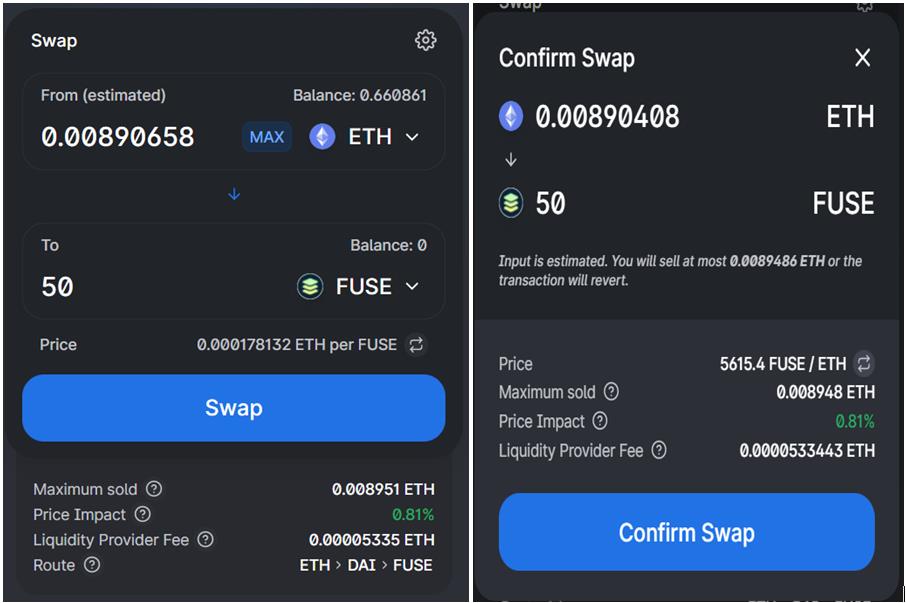 If you are not able to see the token in your MetaMask wallet, then you have to add the token by giving the contract address of the token in the Custom Token tab.

See the below screenshot and add the token address. You can now see the FUSE token in your wallet. 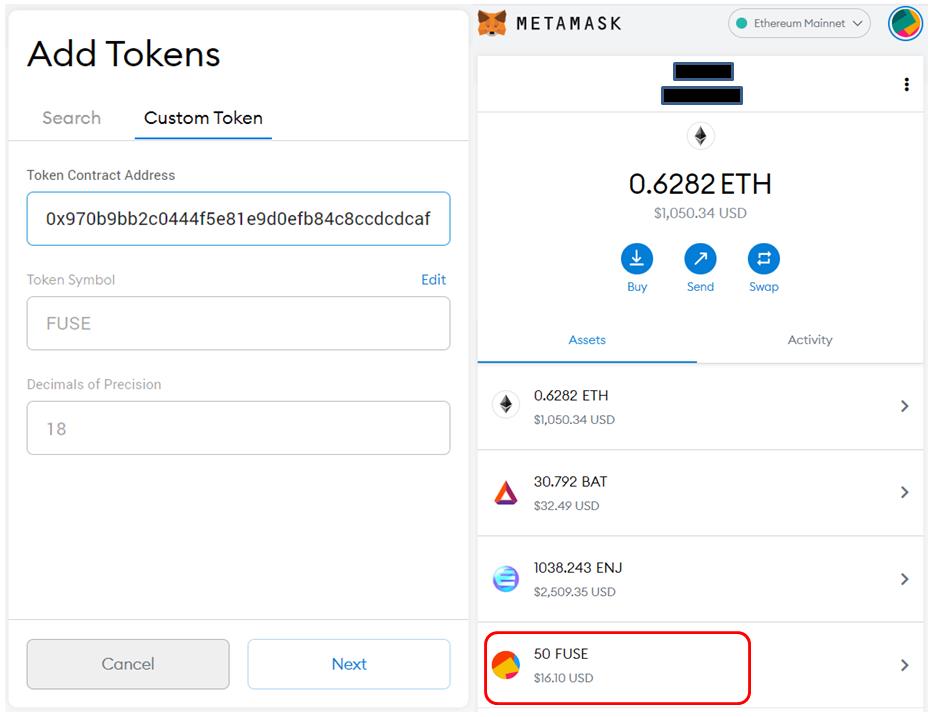 Now use the following details and set up Fuse as a new network on your MetaMask wallet.

Go to Custom RPC and enter the above-mentioned details. 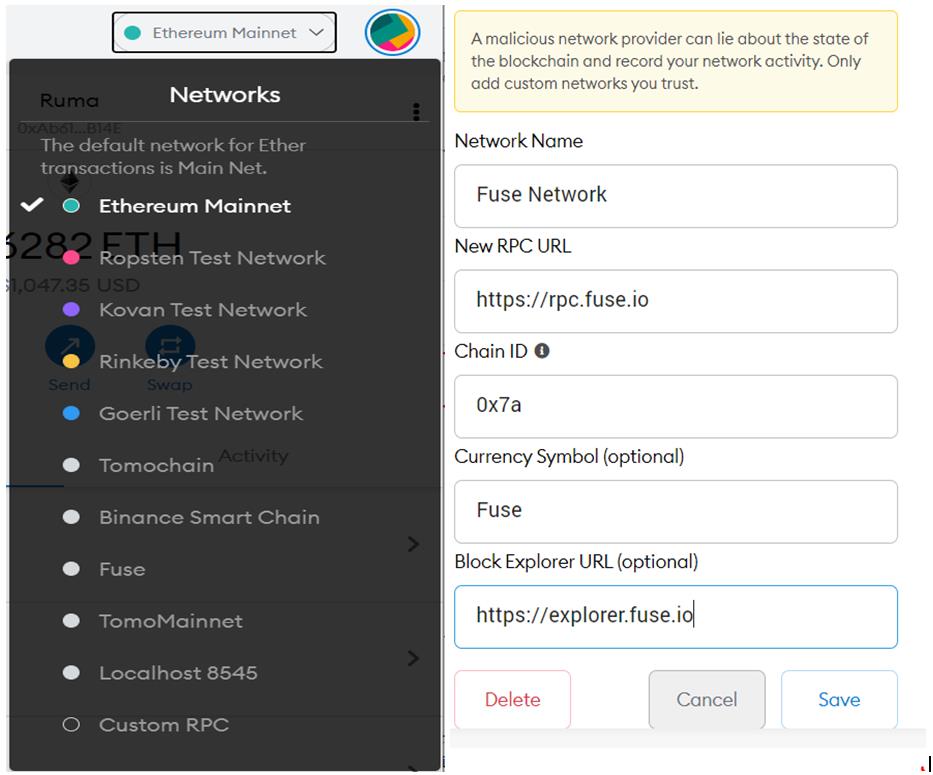 You will not be able to see your FUSE tokens in your MetaMask wallet even if you select the network as Fuse Network now.

For that, there are few more steps that we will do to get the token reflected in your wallet (Fuse Network).

The Fuse platform offers a bridge that is used to convert the ERC version of the FUSE token into a token compatible with the Fuse Network.

Go to the Fuse Bridge and enter the amount of FUSE tokens that you want to transfer into the Fuse Network. The bridge looks similar to the Uniswap platform. 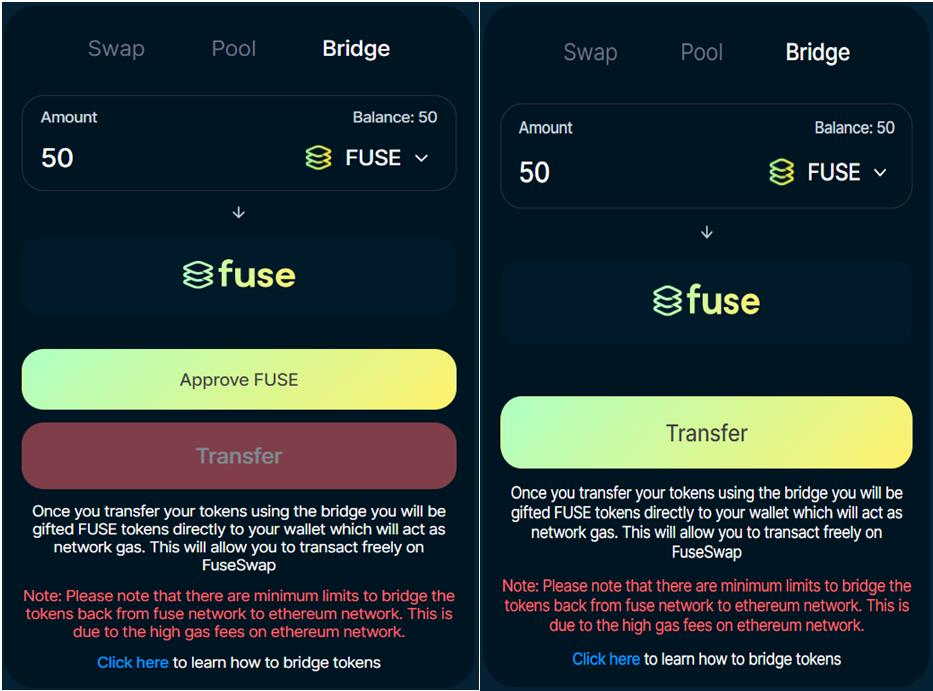 Once the transaction is successful, you can see the desired FUSE token balance reflecting in your MetaMask wallet’s Fuse Network. 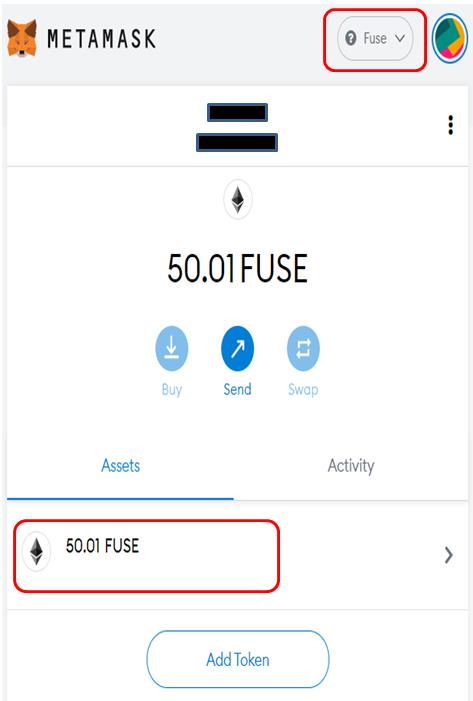 To stake your FUSE token, you need to go to the staking page.

Connect your MetaMask wallet and select the network as a Fuse Network.

The staking dashboard looks like this. You can see your FUSE token balance. 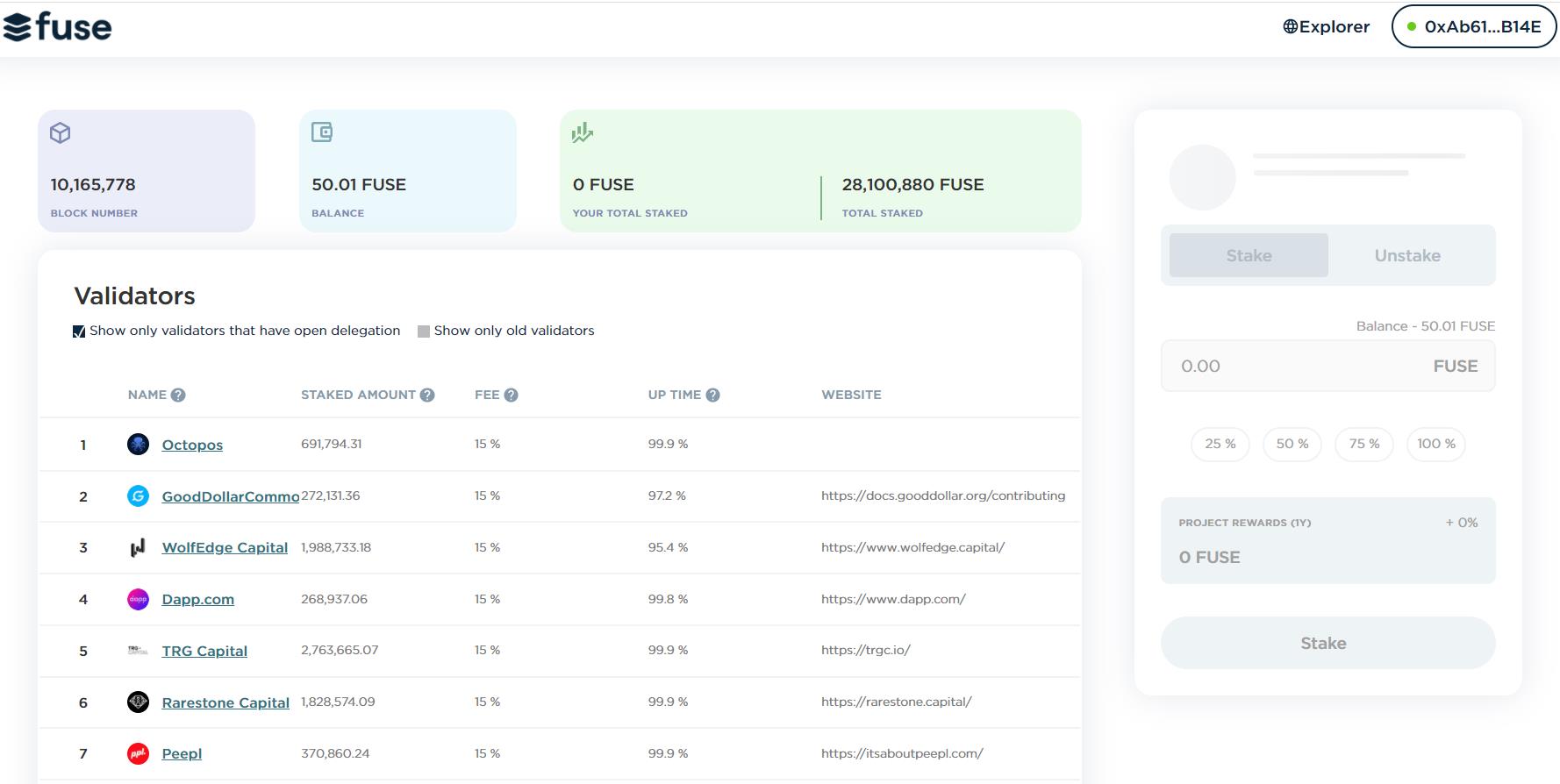 The page lists a number of validators that are available to whom you can delegate your FUSE tokens. It is suggested to select only those validators that have high Up Time.

We have selected Dapp.com as a Validator.

Enter the number of FUSE tokens that you want to stake and confirm the transaction. Users will receive 47.6 % APY as a reward for staking their tokens. 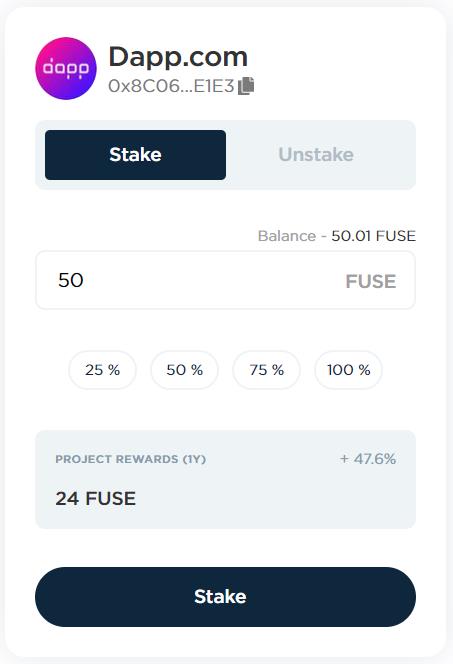 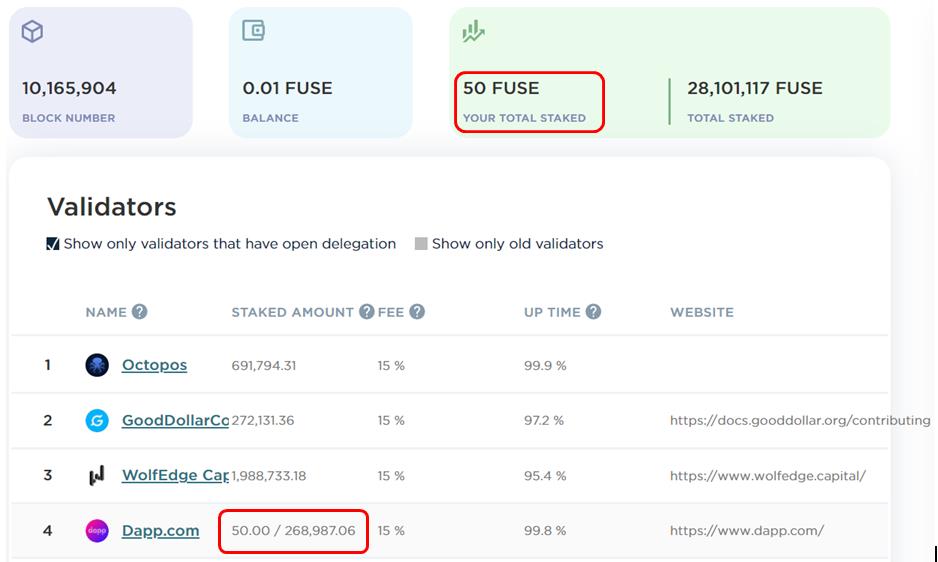 At any time, users can unstake their FUSE tokens.

To Unstake, first select your validator and go to the Unstake tab. Enter the amount of tokens you wish to unstake and confirm the process. 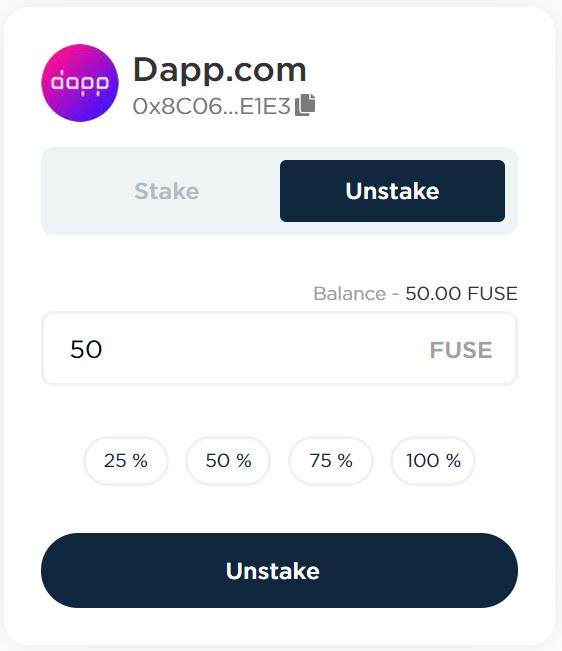 Fuse is a very powerful project. With staking, users can receive attractive rewards. There is no such minimum stake amount criteria for normal users. You can stake any amount and earn rewards. The network uses the DPoS method to elect validators, and they are required to stake a high amount of FUSE tokens to hold their position. Both these conditions help in the proper functioning of the network along with maintaining safety from malicious activities.

The post Fuse Network: How to Stake and Delegate FUSE Tokens appeared first on Altcoin Buzz.